“She leaves a little sparkle wherever she goes”

Kate Brosnahan Spade began her career working in the fashion business at Mademoiselle Magazine in 1986. While she worked there she was the accessories editor of the magazine which made her notice that the market lacked a simple chic handbag.  Her then boyfriend, Jack Spade, suggested that they start a handbag company to fill the gap in the market. Kate thought the idea was insane because not just anyone can start a handbag company, but the rest is basically history. They started their company with 6 handbag designs and they were picked up quickly by Barney’s. They opened up their first storefront in 1996 in New York. She sold off all of her shares in 2007 to Liz Claiborne in order to spend time with her family. In 2016 she had started up another company that also focused on accessories called, Frances Valentine. Not only did Kate Spade keep true to what she loved, accessories, she also kept true to herself over the years.  Her bags had a fun and funky design to them to keep them fresh and youthful, just like herself. She put herself into each and every handbag that she designed and created. Kate Spade, unfortunately, passed away due to suicide on June 5, 2018. She will be dearly missed not only by her family but also by the many people that have purchased her handbags and accessories over the years. For many people, a Kate Spade handbag was their first designer handbag, and they will always remember that purchase. I will be 22 in less than a month and I just got my first Kate Spade item just a few years ago. I was on vacation visiting my aunt in Arizona when we decided to go to the mall and check out a few stores. We stumbled into the Kate Spade store and we were both met with the hardest decision; which bag do we buy? We were both deciding between a couple bags to buy, but I ended up buying a bright blue wristlet that I still wear from time to time. I have also recently purchased a Kate Spade gold watch and bracelet that you might have seen on my Instagram. I will always remember that purchase because it felt like I had finally become an adult. I had a job and I could finally afford my first designer item.

Many celebrities have been seen wearing Kate Spade over the years such as Kate Middleton, Blair Waldorf in Gossip Girl, Taylor Swift, and many more.

Blair Waldorf was seen wearing the Kate Spade New York Little Compton Box Basket Bag in Season 2 Episode 1. This particular bag retailed for $325, and it recently just sold on eBay for $184.95 (in the color black).

Kate Middleton has been seen wearing Kate Spade multiple time over the past few years. In this particular photo, she was seen wearing the Kate Spade Encore Rose Tie Neck Pleat Chiffon Dress, which retailed for $498. 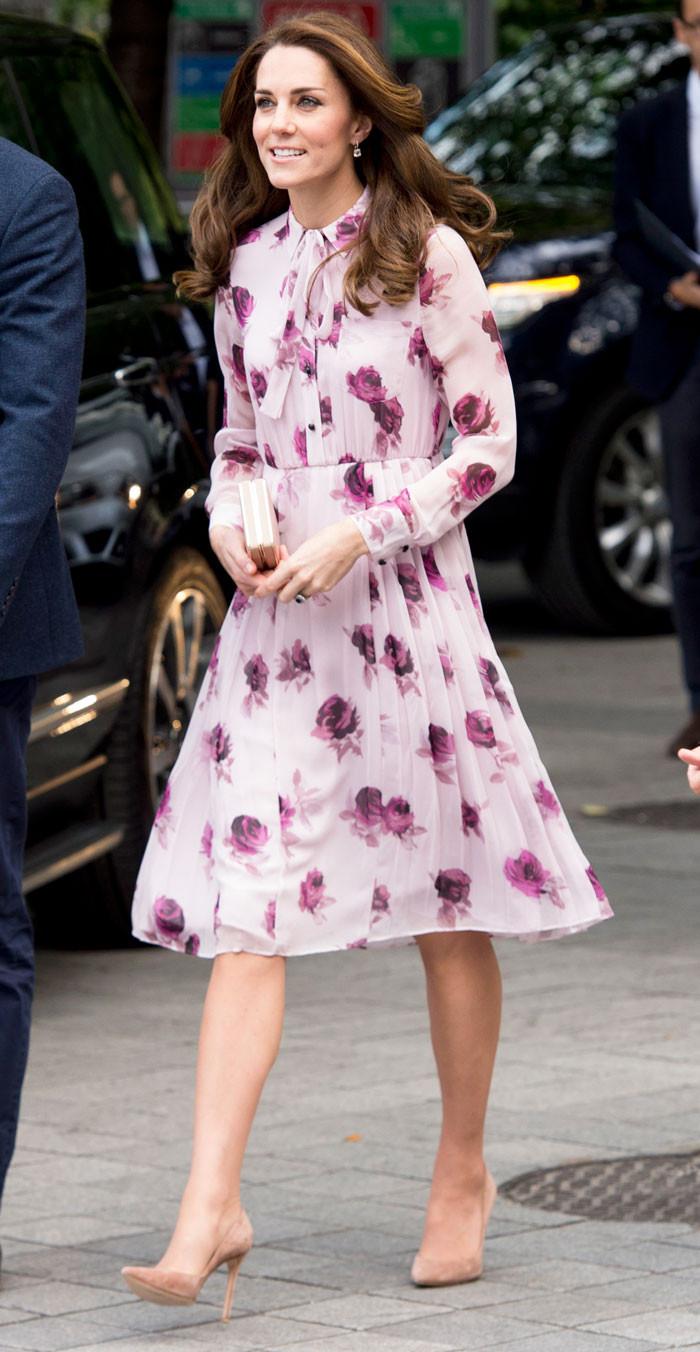 Pippa Middleton was also seen wearing a couple different Kate Spade dresses on her honeymoon in 2017. Here she is wearing the Kate Spade Blue Lantern Poplin Flounce Dress, which retailed for $398.

Kate Spade is known for her crazy out there designs. Her bags are the most sought-after items and have the highest resell value. When scrolling through the highest sold listings on Poshmark I saw a few bags that caught my eye.

The first one being this Kate Spade 3D Pineapple Bag. It sold on Poshmark for $657 when it retailed for only $398.

The second one being this Kate Spade Whimsies Unicorn Balloon Clutch, which sold on Poshmark for $600.

I have sold 5 of the 6 Kate Spade items I have listed in my Poshmark closet over the past year. I have had good luck with each piece I have tried to sell. The first example being this Kate Spade Gold Chain Bracelet that I only had listed for a few days before it sold through the Offer to Likers feature that Poshmark just rolled out a few months ago.

I also sold this Kate Spade Perri In Bubbles Cross Body Purse. It sat for a while in my closet before it sold, but it sold for a reasonable offer and I got a good return on my money.

Kate Spade was a creative and beautiful soul who will be greatly missed by many people. I myself looked up to her as a designer because she built her company from the ground up with her own two hands. She is an inspiration to me not only in the fashion world but, also an inspiration as to how to live my life. She was not afraid to be herself and she let that show through her designs. The people who purchased her designs saw that and respected that. I had been thinking about doing this blog post for a while and I couldn’t figure out what designer to start this series off with. I finally came to the conclusion that there would be no one better than Kate Spade.

I hope you all loved reading this post about the infamous Kate Spade and her brand. Feel free to leave comments down below with any future designers or brands you like me to do a breakdown of!